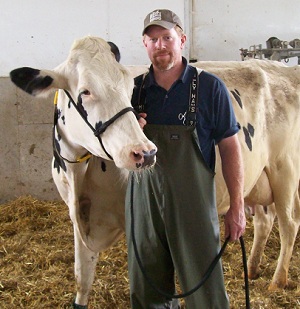 Dr. Clinton was raised on a dairy farm and has been involved in the agricultural community most of his life. After attending the University of Guelph as an Ontario Agriculture Collegiate 96 'Aggie', Reg went on to graduate from the OVC in the class of 2000. Shortly after that he moved to the Kirkton area and started his career as a mixed animal practitioner gently evolving into a bovine specialist. In 2001 the KVC began embryo transfer and with the addition of Dr. Haight in 2005 have since expanded into embryo splitting, sexing, and more transfer (see etvets.ca). While Reg especially enjoys working with dairymen to advance the health and productivity of their herds, he knows that herds are made of individuals and is still keen to solve individual cow issues. In 2004 Reg completed the Dairy Health Management Certificate program with Dr. Buckland through the OVC and has recently completed a course on Dynamic Milk Testing to improve milking efficiency for the cow and the dairyman.
Outside work Reg is involved with the family farm with his brother and parents. Reg is married with 2 children, 1 cat, and a herd of 35 cows.